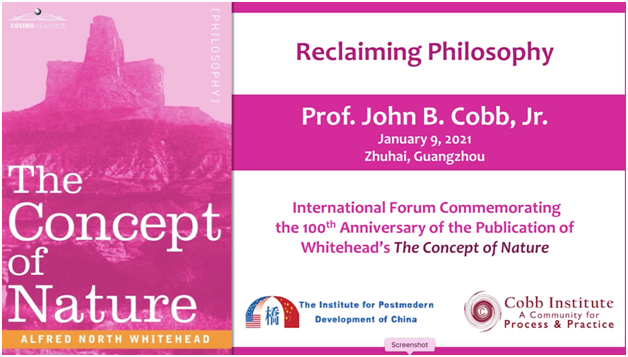 On January 9, 2021, the International Symposium to commemorate the centenary of the publication of Whitehead's the Concept of Nature was held in Zhuhai. The conference was co-sponsored by the Whole Person Education Office of the Beijing Normal UniversityHong Kong Baptist University United  International College and the honorary College of Zhuhai College of Beijing Polytechnic University. It was held in a combination of both online and offline modes. More than 60 scholars and participants from home and abroad attended the meeting.

John Cobb, Jr., the preeminent scholar in the field of process philosophy, congratulated the conference. In his speech, he called for "regenerating philosophy", believing that in the 21st-century philosophy should return to the tradition of "love of wisdom", pay attention to nature and reality again, and overcome the disadvantages of analytical philosophy, such as one-sided emphasis on language, logic, fact analysis, and adherence to value neutrality. Philosophy, like Whitehead's organic process philosophy, should be able to provide rich and convincing explanations for the elements of the real world.

In his speech, Dr. William Andrew Schwartz, Director of the American Center for Process Studies, stressed that Whitehead's concept of nature has important implications for criticizing and transcending the dominant view of nature of industrial civilization in modern society and moving towards ecological civilization.

Dr. Fan Meijun, Program Director of the Institute for Postmodern Development of China, quoted French philosopher Latour as saying that "Whitehead is the greatest philosopher in the 20th century", and his organic philosophy provides a theoretical reference for the construction of ecological civilization.

Scholars attending the meeting conducted in-depth discussions on Whitehead's philosophy. Professor Philip Clayton, President of the Institute for Ecological Civilization, said that modern western philosophy, based on the concept of "inanimate nature", has brought disaster to the real world. Compared with modern western philosophy characterized by reductionism and "inanimate nature", Whitehead's organic philosophy is more beneficial to the world. From the perspective of organic philosophy, nature is alive. Once we adopt the "living nature" and ecological thinking mode, we will have completely different views on the world and realize that all things are interconnected, we are connected with all things, and we are responsible for all things.

Professor Zhang Xianguang of the Grand Valley State University in the United States discussed the relationship between Whitehead's understanding of Plato's concept of "clearance" and event thought, and holds that "clearance" is an indispensable container for the generation of things, similar to "Valley God" in Tao Te Ching.

ProfessorXiao Xianjing, a distinguished professor of South China Normal University, discusses the holism connotation of Patten's "environmentalist" theory and its relationship with Whitehead's process thought and holds that the development prospect of process ecological philosophy is broad.

Professor Yang Fubin, Executive Vice President of the Honorary College of Zhuhai College of Beijing University of Technology, compared and analyzed the similarities and differences between Whitehead's view of nature and Marx and Engels' view of nature from ten aspects. He believes that drawing lessons from Whitehead's concept of nature can further enrich Marx's view of nature and enrich the rational philosophical explanation of relativity and quantum mechanics to contemporary Chinese Marxism In the study of the natural view of Marxism.

Professor Zhang Xiuhua and Dr. Xu Wenjun of the school of Marxism of China University of political science and law analyzed the commonality of Marx and Whitehead's theory of relationship from the perspective of nature and experience.

Professor Yu Yixian of Donghai University in Taiwan has made an in-depth analysis of the theory of objects in Whitehead’s the Concept of Nature.

Professor Guo Haipeng, director of the Whole Person Education Office of Beijing Normal University Hong Kong Baptist UniversityUnited International College, analyzed Whitehead's criticism of absolute space-time view of nature and the theories of the bifurcation of nature, and provided a summary introduction tomajor concepts in Whitehead’s the Concept of Nature such as the method of extensive abstraction, time, space and motion, congruence, measurement and so on.

Mr. Tao Taotao, a doctoral student of Zhejiang University, made a detailed analysis of Whitehead's thought process from early philosophy of science to middle natural philosophy and then to organic process philosophy in his later years.

In his speech, Professor Yu Qizhi of South China Normal University held that in the eyes of Whitehead and Deleuze, "everything is an event" in nature. Dr. Chen Weigong, a graduate school teacher at Beijing International Studies University, thinks Whitehead extends the concept of freedom to natural restrictions on human beings, and explores freedom from the perspective of natural law. Dr. Liu Yiyu, associate professor of South China Normal University, analyzed the event interpretation framework of social ecosystem and its reasonable defense, and held that Whitehead's event theory is its philosophical basis. Professor Wang Kun, from the school of Marxism of Zhejiang Normal University, compared Zhu Xi's concept of "Heaven(Tian)" with Whitehead's concept  of "God", and pointed out that they are internally consistent "way of heaven". In response to Professor Zhang Yaonan's question, he said that Whitehead's process organic thought may be influenced by Chinese traditional culture, Neo Confucianism and Yi Ching. From the perspective of Whitehead's organic philosophy, American scholar Roger COE analyzed the development of holistic education science and its value in contemporary education reform. Professor Yang Li of Harbin Normal University interpreted Whitehead's concept of realistic existence as the starting point to explain its significance in pedagogy. Dr. Li Dong, lecturer of Inner Mongolia Normal University, expounded the understanding view of process philosophy and its significance in pedagogy. Based on Whitehead's organic philosophy, Dr. Liu Yuanhao, a lecturer of Harbin University of technology, reflected on the ethical thoughts in teaching. Dr. Liu Jinnuo, lecturer of Harbin Normal University, discussed the ontological basis of Whitehead's aesthetic thought.Professor XieBangxiu of the Hubei University of Police shared her teaching pedagogy of English as a second language based on process thought.

It is reported that this International Symposium is a continuation of the Symposium Commemorating the 100th anniversary of the publication of Whitehead's An Enquiry Concerning the Principles of Natural Knowledge in December 2019. The organizers, Prof. Yang Fubin and Prof Guo Haipeng, have decided to continue to organize annual academic conferences to promote the study of Whitehead's thought at home and abroad. The next conference will be held in December 2021 on Whitehead’s early philosophy of mathematics as illustrated in A Treatise on Universal Algebra and Principia Mathematica co-authored with Bertrand Russell.