Warning: "continue" targeting switch is equivalent to "break". Did you mean to use "continue 2"? in /nfs/c12/h07/mnt/224386/domains/ctr4process.org/html/wp-content/plugins/woocommerce/includes/admin/reports/class-wc-admin-report.php on line 132

Warning: session_start(): Cannot start session when headers already sent in /nfs/c12/h07/mnt/224386/domains/ctr4process.org/html/wp-content/plugins/custom-searchable-data-entry-system/sds-session.php on line 5
 New Book: Process Philosophy and Political Liberalism – The Center for Process Studies 
Warning: "continue" targeting switch is equivalent to "break". Did you mean to use "continue 2"? in /nfs/c12/h07/mnt/224386/domains/ctr4process.org/html/wp-content/plugins/jetpack/_inc/lib/class.media-summary.php on line 77

Warning: "continue" targeting switch is equivalent to "break". Did you mean to use "continue 2"? in /nfs/c12/h07/mnt/224386/domains/ctr4process.org/html/wp-content/plugins/jetpack/_inc/lib/class.media-summary.php on line 87 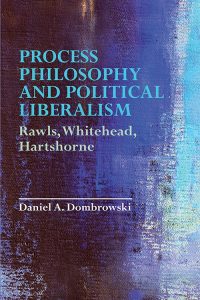 In Process Philosophy and Political Liberalism Daniel A. Dombrowski argues for political liberalism as a process-oriented view and process philosophy as a politically liberal view
. . . Argues for the processual, historical qualities of Rawlsian political liberalism
. . . Shows the inadequacies of certain illiberal political tendencies on both the political right and the political left
. . . Explicates why the processual method of reflective equilibrium is crucial in a just society
. . . Explores the implications of process liberalism for issues in animal rights and environmental ethics

Dombrowski brings together the thought of the 20th-century philosophy’s greatest political liberal, John Rawls, with the thought of the great process philosophers, Alfred North Whitehead and Charles Hartshorne. He shows that political liberalism is intimately linked with process philosophy, renaming it ‘process liberalism’. He justifies this process liberalism in contrast to four potentially troublesome sources or influences: metaphysics, religion, right-wing politics and left-wing politics.

Dombrowski engages a series of interlocutors and alternative positions including Franklin I. Gamwell, Timothy D. Snyder, Martin Heidegger and Karl Marx. In conclusion, he offers a compelling, intricate and resourceful argument for nonhuman animal rights based on Rawlsian principles, which in turn forms the basis of a future environmental ethics.

Available at EdinburghUniversityPress.com or Amazon.com.