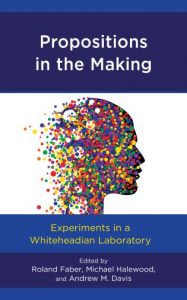 How do we make ourselves a Whiteheadian proposition? This question exposes the multivalent connections between postmodern thought and Whitehead’s philosophy, with particular attention to his understanding of propositions.

Edited by Roland Faber, Michael Halewood, and Andrew M. Davis, Propositions in the Making articulates the newest reaches of Whiteheadian propositions for a postmodern world. It does so by activating interdisciplinary lures of feeling, living, and co-creating the world anew. Rather than a “logical assertion,” Whitehead described a proposition as a “lure for feeling” for a collectivity to come. It cannot be reduced to the verbal content of logical justifications, but rather the feeling content of aesthetic valuations. In creatively expressing these propositions in wide relevance to existential, ethical, educational, theological, aesthetic, technological, and societal concerns, the contributors to this volume enact nothing short of “a Whiteheadian Laboratory.”

Available for purchase at Rowman.com.

This book offers a variety of approaches to the understanding of Whitehead’s theory of propositions. For Whitehead, a proposition is less a statement to be judged true or false, than it is a suggestion that proposes alternative ways of thinking, and encourages us to think about new possibilities. The essays in this volume look at the various ways — some more concrete, and some more abstract — that Whitehead offers us openings and opportunities for change.
— Steven Shaviro, Wayne State University

In essays that dance Whitehead into a fresh adventure in thinking, Propositions in the Making performs what it proposes. It lures each reader to become a Whiteheadian proposition, which is itself a lure to feeling. So we are spun brilliantly round, in a thinking that experiments with its own affect and yours. In troubled times, such contagious creativity in discourse may prove itself not just an intellectual luxury for Whiteheadian nerds but a planetary path to a future worth realizing.
— Catherine Keller, Drew University

This imaginative and wide-reaching book draws the reader into the nexus of the event itself, articulating propositions that offer their own lures for feeling, whether by putting forth a proposition or by encouraging exploration of propositions and their affects. The topics taken up provide a creative variety of starting points and lead in exciting directions aimed at inaugurating a novel becoming toward a collective aim. It is precisely the kind of philosophical text needed for our present world.
— Jeremy Fackenthal, Institute for Ecological Civilization